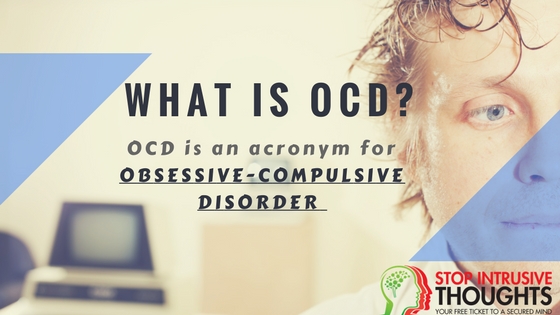 OCD is an acronym for OBSESSIVE-COMPULSIVE DISORDER , it is a mental illness which seems to start to affect millions over the world. BBC Health reports that in the United States one out of every 50 American adults and 100 children has this mental illness.  This disorder makes the patient feel angry, scared, afraid or tormented, it caused by repetitive, unwanted intrusive thought, mental image or impulse. This unwanted feeling makes them repeatedly behave irrationally.

One of the most popular symptoms of obsessive-compulsive disorder is anxiety. This symptom fills the patient mind with the feeling that if he/she does not complete a task something horrible might happen. These tasks differ from different thoughts, some task might be hand washing or checking if all doors are locked. This action might seem like normal behaviors, however, when these tasks are done more than once every hour, it becomes a disorder.

These disorders do not affect the ability to complete tasks, it also affects OCD patient’s relationship with others, their ability to take part in group task or fit in the society.

HOW TO IDENTIFY OCD

A lot of people do not fully know the difference between a repetitive thought and an obsessive-compulsive disorder. Here is how to differentiate one from the others. Both repetitive thought and OCD have tormented you with unwanted repeated intrusive thoughts. However, in OCD, these thoughts cause a lot of distress, consume way more time and interfere entirely with your daily life.

There are two important features of this mental illness, which makes it easy to predict – obsession and compulsion. Although some patients experience one without the other feature

Obsessive-compulsive disorder is already understood to fill the minds of patients with unwanted intrusive thoughts, these thought causing distress is called obsession.

A thought called obsession might be a single thought or more. These thoughts will keep coming back minutes after minutes. Although these obsessions are unwanted by the patients, it just kicks off in their minds without permission or notification which is why it called unwanted intrusive thought. It has been observed that people do not have the same obsession, some obsession is about God, devil, religion, pets and many more.

Recently, studies have shown that about half of entire people diagnosed with obsessive-compulsive disorder have obsession without the compulsion part. This condition where you have an obsession is called “Primarily Obsessional OCD” shortened into “Pure-O”.

Below are examples of common obsessional thought that goes on in the minds of obsessive-compulsive disorder patients:

Patients with obsessive-compulsive disorder are tormented with obsession, which makes them engage in certain rituals so they could have those repeating thought stop. People with OCD believe the only way to stop those unwanted thoughts is by doing those rituals and also help stop horrible things from happening to them or loved ones.

These compulsions are extremely hard for patients to resist, when unable to perform them, they suddenly become worried and anxious. When allowed to perform those rituals, they seem to have a brief sense of relief and seem relaxed immediately. Sadly, these compulsions do not help fight this obsession only make the obsession and compulsion stronger every time.

Have you heard of body tics? If yes, then many of the rituals patients with obsessive-compulsive disorder have is quite similar to body tics. A recent survey done in the United States shows that about 40% of people with OCD have a tic disorder.

Some popular compulsion act by people with OCD are listed below:

Sadly, whatever is causing the torment illness is still unknown to date. Scientists have shown that some biological factor might have something to do with this illness. They believe genes aid the growth of obsessive-compulsive disorder. If this disorder begins in childhood, then there is a higher probability that someone from the family also has OCD than if it begins in adulthood. A theory proposed is that this illness is as a result of things human did during evolution.

Although why it happens we don’t have an idea, but the risk factors include:

A study called Twins and family shows that the relatives such as siblings, parent or child close to people with OCD have a higher probability of them having the mental illness themselves.

Past tragic incidents tend to increase the risk of developing the obsessive-compulsive disorder. A tragic incident like physical, sexual abuse or other traumatic events in childhood.

Till date, there is no laboratory test that helps in identifying If a person has obsessive-compulsive disorder or not. However, professionals in mental health well-experienced in various disorder conduct many interviews, collecting much information to help conclude if one is affected by OCD or not.

There are a lot of other disorder that co-exist with this mental illness. Among this disorder, a person with the obsessive-compulsive disorder but have at least one of these disorders. However, when treating OCD trained medical health profession also treat the co-existed disorder alongside OCD.

Example of a co-existed disorder are listed below:

There are other forms of disorder which share similarities with OCD, these co-existing symptoms have to be treated by a trained medical health professional. Other similar disorders to OCD are listed below:

Obsessive-compulsive disorder is a common, long-lasting, chronic disease, this disorder does not have a current cure. Fortunately, put with these mental disorders can enjoy a great relief from their symptoms.

Currently, there are two forms of treatment for OCD patients – medication, psychotherapy or both. Some patients after receiving treatment started to show improvement while others still have the symptoms.

Years after years, new medications to combat obsessive-compulsive disorder are being produced – fluoxetine, fluvoxamine, and sertraline. SRIs and SSRIs are both effective, patients with OCD starts showing improvement from 7 weeks to 13 weeks, but SRIs require you take higher doses for effectiveness.

Certain patients who do not respond well to these types of medications are prescribed antipsychotic medication like risperidone. This drug is being used also for patients with suffering from both OCD and tic disorder.

Note, after you have been prescribed a drug, continual usage is important for effective treatment of the disorder. This medication is not to be stopped as it might lead to a rebound or even worsen the symptoms of obsessive-compulsive disorder you experienced initially without your doctor consent. Sudden withdrawal for using them might lead to severe withdrawal symptoms.

Therapy has been proven to be effective just as medication to help reduce the symptoms of OCD both in kids and adults. Patients are made to undergo two forms of combined therapy behavioral therapy and cognitive behavioral therapy. This therapy makes use of a technique called exposure and prevention response.

Every obsessive-compulsive disorder has a trigger what brings to light the symptoms, it might be dirt, darkness, open doors, unkempt room and many more. These triggers differ from one patient to another.

The therapy teaches you how to control the symptoms by making you face your triggers. It helps you understand that these triggers have no power over you and can’t harm you in any way. After consistent trials, patients begin to feel less scared or anxious about their OCD triggers.

For instance, a patient with germs as triggers, will be placed in a very dirt environment, make him touch and not run off to the toilet to wash his hands off. However, this therapy must be proceeded by patients’ interest as it might have an adverse effect.

This method of treating OCD is extreme and is only do when all other forms of treating OCD has been tried and failed. In the United States of America, this method is done only when medicine and cognitive-behavioral therapy has failed.

There are little things that you can do to help yourself get control over your OCD symptoms;

This is done whenever the obsession starts, you try to shift your urges, fears, and anxiety to something more fun and attention consuming. You can try jogging, reading, chat with friends, watch movies or play your favorite games. After about 15 minutes of fun, try recessing the unwanted intrusive thought, by then it will have no or little effect on you.

These frustrate the obsessions in your mind. Always keep a jotter and a pen close to you. Immediately these thought or impulse starts, take out your writing materials and start writing. Your brain thinks faster than you can put them into writing, which means you can’t write as faster as your brain thinks, so this piss of the obsession as you make it boring for it to keep repeating in your mind.

For this method to bring about relief for you, you have to keep writing them down as they keep coming to your mind. Also, you can try another method, try your thought in a diary and promise to revisit them later. Whenever you are free, open your diary and revisit that obsession, you will find them less threatening.

Many people with OCD try suppressing these thoughts, mental images or compulsion which only lead to more or severe symptoms. Another trick you can use is, divert the obsession to your obsession time which you have created.

You can choose a period of about 10 minutes each day at a particular spot to think about this obsession. A patient can pick the bathroom from 5:00 pm to 5:10 pm daily. During these obsession time, try focusing on the triggers, negative aspect of the thoughts or urges. Don’t be scared, think as negatively as you can during the period. At the end of every period take a deep breath to calm yourself down and walk away.

If you can properly handle your stress, and tension level, you can handle your OCD urges. For effective improvement practice the techniques consistently.