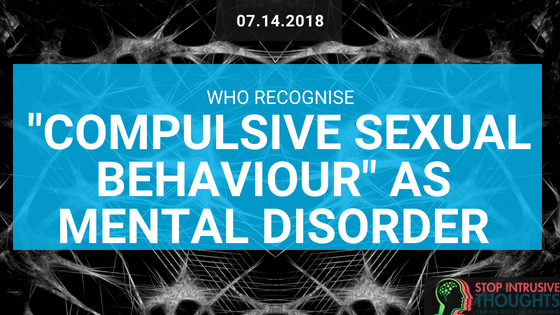 Geneva, Switzerland | AFP: The World health organization has recognised “Compulsive sexual behaviour” as a mental disorder, But said Saturday (14/07/2018) it remained unclear if it was an addiction on a par with gambling or drug abuse.
The contentious term “Sex addiction” has been around for around for decades but experts disagree over whether the conditions exist.

In the latest update of the catalogue of diseases and injuries around the world, the WHO takes a step towards legitimising the concept, by acknowledging “compulsive sexual behaviour disorder”, or CSBD, as a mental illness.

But the UN health body stops short of lumping the condition together with addictive behaviours like substance abuse or gambling, insisting more research is needed before describing the disorder as an addiction.
“Conservative speaking, we don’t feel that the evidence is there yet… that the process is equivalent to the process with alcohol or heroin,” WHO expert Geoffrey Reed told AFP Saturday.

In the update of its International Classification of Diseases (ICD), Published last month, WHO said CSBD was “characterised by persistent failure to control intense, repetitive sexual impulses or urges.. that cause marked distress or impairment.
But if said the scientific debate was still ongoing as to “whether or not the compulsive sexual behaviour disorder constitutes the manifestation of a behaviour addiction”.

Reed said it was important that the ICD register, which is widely used as a benchmark for diagnosis and health insurers, includes a concise definition of compulsive sexual behaviour disorder to ensure those affected can get help.

“There is a population of people who feel out of control with regards to their own sexual behaviour and who suffer because of that,” he said pointing out that their sexual behaviour sometimes had “very severe consequences.”
“There is a genuine clinical population of people who have a legitimate health condition and who can be provided services in a legitimate way,” he said.

It remains unclear how many people suffer from the disorder, but Reed said the ICD listing would likely prompt more research into the condition and its prevalence, as well as into determining the most effective treatments.
“Maybe eventually we will say, yeah it is an addiction, but that is just not where we are at this point,” Reed said.

But even without the addiction label, he said he believed the new categorisation would be “reassuring”, since it lets people know they have “a genuine condition” and can seek treatment.

– No excuse for rape –
Claims of “Sex addiction” have increasingly been in the headlines in step with the #MeToo movement, which has seen people around the world coming forward with allegations sexual mistreatment.

The uprising has led to the downfall of powerful men across industries, including disgraced Hollywood mogul Harvey Weinstein, who has reportedly spent months in treatment for sex addictions.

Reed said he did not believe there was reason to worry that the new CSBD listing could be used by people like Weinstein to excuse alleged criminal behaviours.
“It does not excuse sexual abuse or raping someone.. any more than being an alcoholic excuses you from driving a car when you are drunk. You have still made a decision to act,” he said.

While it did not recognise sex addiction in the first update of its ICD catalogue since the 1990s, WHO did for the first time recognize video gaming as an addiction,  Listing it alongside addictions to gambling and drugs like cocaine.

The document, which member states will be asked to approve during the World Health Assembly in Geneva next May, will take effects from January 1, 2022, it it is adopted.